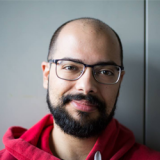 During his research efforts for his Doctoral Dissertation the candidate has published (3) works in international scientific journals with peer review and (5) works in international scientific conferences with peer review. During his research activities, Mr George Chatzikonstantis has collaborated closely with Erasmus Medical Centre Rotterdam (Netherlands). He is expected to complete his Ph.D. research studies within the year 2019.